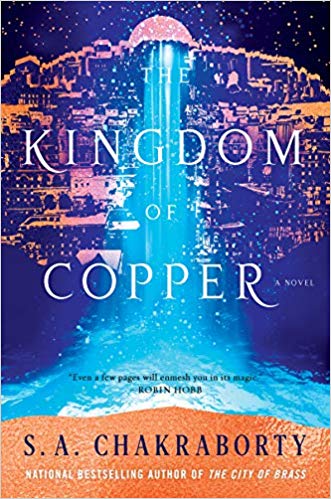 The Kingdom of Copper by S. A. Chakraborty

Guys.  I love this series so much.  SO MUCH.  Starting with “The City of Brass” this book continues the The Daevabad Trilogy.  Um, and I litereally on the edge of my seat waiting for the final book.  But I digress. 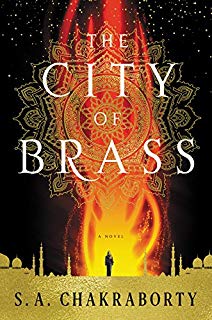 Before picking up this book, I re-read “The City of Brass” in a weekend.  I had forgotten about the big ending, and was shocked all over again on what happened.  But I won’t spoil it.  Just know, that at least one question is answered pretty early on in the book.  So, in this continuation, we follow Nahri in her ongoing quest to become a healer and take on her family legacy in the famed magical capital.  Now married to the heir of the throne, she has to navigate her political life, but her personal life as well.

Aliyzad, bansihed from his father’s kingdom, returns a hero.  He doesn’t seek the power, but the city starts to rally around him.  Could it be a danger to his father’s reign?

Dara, oh Dara.  Not exactly my favorite character, but he does experience a lot of growth in this book, and I’m intrigued to see where it goes from here.

And it wouldn’t be a good book if there wasn’t a grand battle.  It was very fast paced and left the reader guessing which side was the “right” side the entire time.  And what side Nahri would ultimately take.

I just love it so much.  And the ending….GURRRRRLLLLL….I gasped!  Out loud!  I need to know what happens!  Which is always a sign of a good book.

So, what I’m saying is….if you like far off places, magic spells, a prince in diguise….you’ll love this book too.

Also, I just turned in the first edits of my own book…..so, *fingers crossed* you’ll be seeing more information soon (such as a pre-order link!)