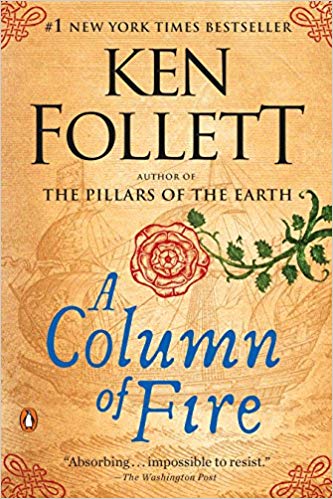 A Column of Fire by Ken Follett

So, this is the continuing saga of the village of Knightsbridge that started with the building of the cathedral in Pillars of the Earth”.  If that was an epic trilogy, this one was equally as intriguing.

Starting with the reign of Queen Mary (Bloody Mary) and ending with the plot to blow up Parliament and King James, the book follows the villagers through Catholic and Protestant struggles during the Tudor legacy.  For those that don’t know….Mary was Catholic and hated Protestants.  Elizabeth was Protestant and allegedly more accommodating of Catholics, but ended up executing a whole mess of Priests.  King James extended her legacy.  So basically lots of bloodshed spilled in the name of religion.

The book crosses oceans….it bounces between England, Spain for a brief time, Netherlands for even briefer, and a long journey into France.

I love Follett’s books because they are proper sagas.  Spanning at least 80 years, the reader sees families grow up and change.  They also see how others relate to each other.  There are SEVERAL villains in this book, and man, they are the WORST!  Luckily, their ends are usually justified and are satisfying to the reader.  The “heroes” of this book are the people who realize that tolerance and acceptance is the way forward.  While they have to play politics and sometimes do things they aren’t proud of, if they had their way, people could worship and live in peace as needed.

I enjoyed this more than the Pillars series…maybe it was because I know the period of history that is discussed.  I went through a major Tudor period a few years ago, so Queen Elizabeth is my knowledge base.

Also, I saw Hamilton….and I LOVED IT!!!  The book was good, and the musical definitely lived up to the hype.  I’ve been singing the soundtrack for like  two weeks now.  And on Sunday I’ll be taking a dance class with a member of the cast.  Should be fun.

…..and another thing….if you’re in Boston on Saturday October 13, stop by the Sisters in Crime NE booth from 10-11 and say hi!  I have some book swag for my upcoming mystery!