So, I’ve just recently had several bouts of anxiety that I’m not quite sure how to deal with.  I’m seeking help, b/c it’s annoying to deal with.  I’ve even started having random panic attacks which make every day life hard.  Luckily, they aren’t as severe as others, but still enough to disrupt life.  My anxiety mostly centers around travel, and in August I’m trying to head down to NYC for the Writer’s Digest Conference.  Everything is booked….and I was supposed to go last year….but that darn anxiety got the best of me.  So, here’s hoping that I can get my stuff together for a four day trip out of town.

Which, leads me to the book I want to talk about in this post. 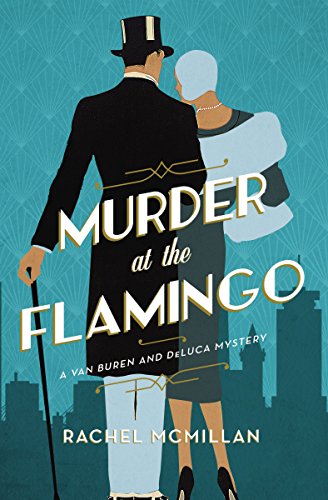 Murder at the Flamingo by Rachel McMillan

Now, you might be saying to yourself….”what is Nicole talking about….this looks like a good old fashioned historical mystery, not some treatise on anxiety.”  And you’d be right.  It is a good old fashioned historical mystery (set in Boston no less!).  BUT it also depicts a character who suffers from anxiety and panic attacks as well.  And it doesn’t define him in the end, and he learns how to cope with the help of a sassy former debutante.

I get ahead of myself though.  Hamish DeLuca was a going to be a lawyer until a panic attack in the courtroom drove him from Toronto to Boston where his cousin was setting up the new Flamingo nightclub.  Regina Van Buren (yes, one of those Van Buren’s), Reggie to her friends, escaped a mundane life of high society in Connecticut to become the secretary for Hamish’s cousin.  She always wanted to be like the self-sufficient women she saw at the pictures, and this is the first step to her new life.  The office is located in the North End, with cannoli’s galore, and shady characters around every turn.

The Flamingo opens to great success, and becomes even more of a destination when a dead body is found in the club.  Hamish and Reggie think it’s murder, while everyone else wants to sweep it under the rug as a tragic accident.  Is it the mob?  Careless accident?  Jealous boyfriend?  Random gentlemen in the club?  The two decide to crack the case and on the way learn some surprising truths about themselves.

I enjoyed this immensely.  It was a great introduction to the characters and the city of Boston.  I can’t wait to follow the trail of the newly minted detectives in further books!

Guys, the hype is well deserved for this book. (Now the inaugural book for Jimmy Fallon’s Book Club)

Children of Blood and Bone by Tomi Adeyemi

The book reads like a movie.  I was entranced from the first chapter.  In a world with out magic, Zelie remembers a time before the “raid” with her family and their magic.  The current king eradicated the country of magic, which included Zelie’s mother.  As a young diviner, she is considered the lowest of the low and treated as such by the royal guards.  They harass her and other villagers on orders of the King to try and keep them kicked down.  Secretly trained in fighting by Mama Agba, Zelie is constantly searching for a way to help her family and friends.  Then suddenly everything changes.

The young princess of the country escapes with a sacred magical object and runs into Zelie while fleeing the guards. Zelie learns that magic isn’t gone forever, but needs to be brought back through a sacred ritual that only she, her brother, and the princess can complete.  Thus starts an adventure across the country.  A large cache of characters come and go in her life that all help lead her to where she needs to go.  Does the Princess really believe in her cause?  Will they make it to the sacred island before time runs out?  Who could she really trust?

The character of Zelie is astounding.  She is a flawed hero that makes mistakes, doubts herself, and tries to do the right thing.  She doesn’t always succeed, which makes the book super realistic even in the midst of the magical fantasy.

I was in it from the beginning.  And then the Author’s note at the back of the book broke me.  As a white woman, I know I can’t understand the struggles of POC in today’s society.  I just know that reading the note at the end and the attached articles make me want to make the world a better place.  This is the same feeling I got reading “The Hate U Give” by Angie Thomas too…..another great book.  Empathy is important, and I think this world could use more of it, especially with all that is going on in the US right now.#FamiliesBelongTogether

I cannot wait to see this on the big screen….and for the further adventures!  The book ends on a cliffhanger so big that I don’t know how I’m going to make it until the next book comes out.  Thanks Tomi Adeyemi!  One of my favorites of the year!