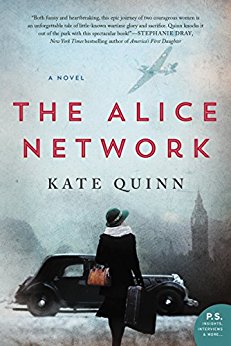 The Alice Network by Kate Quinn

Did you know that there was a whole network of women spies during World War I?  I didn’t.  I knew there were women involved in espionage during the 2nd World War, but I never really thought about the war before.  I guess it only makes sense.  Women want to fight for their country as much as most men, they are just not given the same opportunities especially at that time.

While the main characters of this book are fictional (according to the author), she uses two real life women to propel the story.  The head of the “Alice Network” is Lili (real name unknown until the end).  In 1915, a young woman with a stutter, Eve is desperate to join the war.  She is stuck filing and is recruited by a dashing Captain who sees her potential.  Another real life member of this network, Captain Cameron is one of the main architects of this network.  He trains Eve and sends her into France to infiltrate a café run by a collaborator and visited by German officers.  With the help of two other members of the network, she learns important information and passes it along.

The story is weaved into the tale of a woman in 1947 who is searching for her cousin who went missing in WWII from a similar restaurant and town.  It turns out that Eve is the last person to know what happened to the owner of the café and has her own reasons to search for him.  Charlie St. Clair taps Eve and her driver to help her search for her cousin.  The story weaves between Eve and Charlie, and we learn more about what women had to go through in the war in order to survive and help the war effort abroad.

These types of stories are amazing to me.  Especially after just watching Wonder Woman and knowing the women can be the fiercest of fighters and protectors.  Even though men at the time denied their influence, this network of spies provided information that could’ve turned the war around.  As it is today, sometimes men don’t listen to the information that women give them, and they miss valuable opportunities.  The women portrayed in this book are heroes and should be celebrated as such.