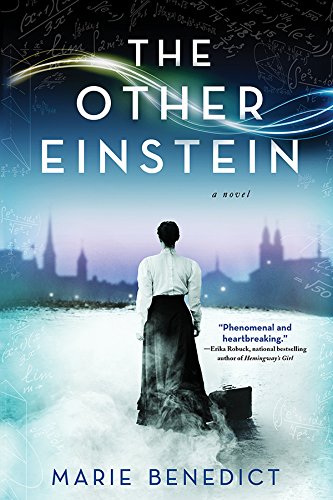 The Other Einstein: A Novel by Marie Benedict

Science!  Okay, not one of my best subjects.  I’m fascinated by smart people, but all the math is very intimidating.  I’ll stick with my literature and writing thank you very much.

So, we all know Einstein and the theory of relativity.  But did you know he wasn’t always the crazy white haired guy with the bushy mustache that we think of him as?  Before he became science famous, he was a student attending a prestigious physics academy where he met his first wife.  This book is about her and her journey in Einstein’s circle.

Mitza Maric is a young girl from Eastern Europe who has an affinity for math and learning the physics of the world.  Marred with a “deformed” hip that causes her to limp, she hardens her heart against outsiders and with the approval of her father becomes one of the first women to attend school in Zurich.  In a small class of six other men, including Albert Einstein.  They strike up a friendship that later turned into a love affair.  Even though they cement their relationship on a trip to Lake Cuomo which leads to a pregnancy.  At the time, Albert became distant and focused on a job search, neglecting Mitza and their soon to be born child.  She has the baby at home but eventually returns to him, leaving the child with her parents.

She finally convinces Albert to marry her to provide for her child.  They never send for their daughter, and Albert almost pretends she doesn’t exist.  An unspeakable tragedy happens, and their tenuous relationship fractures even more.  The book posits that Mitza helped refine Albert’s theory of relativity, even coming up with the main idea herself.  She finds her name expunged from the records of the findings, and slowly slips into a deep depression.  Finding her way out consumes the rest of the book, and it definitely doesn’t make Albert seem all that great of a guy in the long run.  Maybe it’s because he’s a genius, but his interpersonal skills so evident in his student days disappear around his wife.

I didn’t know about this part of history, and I find it amazing that this woman could have had a hand in some of the greatest theories of the time.  While there is no proof she authored anything, it is believable that a woman who studied physics would be a sounding board for her equally inquisitive lover.  The book ends on a satisfying note and I would be interested to read more books about women in history and the men they shaped.

**Note:  Still querying my novel.  All edited and updated.  Have about 100 queries out there….and will hopefully be able to query more at the Writer’s Digest Conference in August and Bouchercon in October!**

#mc_embed_signup{background:#fff; clear:left; font:14px Helvetica,Arial,sans-serif; }
/* Add your own Mailchimp form style overrides in your site stylesheet or in this style block.
We recommend moving this block and the preceding CSS link to the HEAD of your HTML file. */