Like most children (girls) of the 80’s, I always wanted to be a Princess.  One of those bad-ass princesses who fought like the guys and led their kingdoms against nefarious evil doers.  But also the type who gets the Prince.  Cause duh.  I remember my first series that I gravitated to dealing with dragons.  With a quick google search today I found them again (and I might buy them for a couple of dollars….I remember them being so good!)  It was a series that started with:

Also staring a bad-ass Princess and follows her adventures across several books.  I don’t know why I remember it so fondly, but I do remember it well.

I’ve been on a kick of historical mysteries, usually set in Victorian times with women heroines who take on the underbelly of the world around them.  So similar to those fantasies of youth.  Just a little more grounded in reality.

Well, lately, I’ve been reading a lot of twitter authors and agents supporting a new crop of young adult fantasy novels that have sounded so intriguing that I thought I would dive right in!   What first attracted my attention was two different series of books based on Libraries. 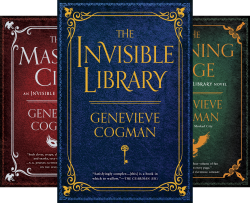 So, in these books….it’s less about Princesses and whatnot and more about saving knowledge and protecting people.  The Invisible Library series is similar to the show “The Librarians” in which there is a central repository of books and it sends it’s people out to collect books that might have special significance.  It might be re-prints of books with sacred knowledge in it or drafts of books that later become famous with new information in them.  In worlds with Dragons and Fae’s, the young charge must navigate politics and danger while trying to retrieve the items they are sent for.  The worlds can range from chaotic to peaceful, different time periods, steampunk, Victorian, etc.  It’s fun to see the imaginary worlds that Rachel creates.

Conversely, The Great Library series is a little bit darker with more of an apocalyptic feel to it.  In this world, the library is an all powerful all seeing repository of “truth and knowledge.”  Jess Brightwell, the main character, comes from a family of book smugglers who are the enemies of the library.  By chance he becomes involved with the Great Library and meets a rag tag group of friends who by the fourth book in the series are on the run with the knowledge of the Library they posses and try to take the library down in order to build it up to it’s original purpose.  The fourth book is forthcoming and I got to read an advance through Net Galley and it definitely keeps the action ramped up and the stakes even higher.  The author even includes a playlist in the back of the book if you want to fully immerse yourself in the world/feeling of what the book is meant to convey.

I never got into the Hunger Games or Divergent series, but for some reason I got addicted to these two pretty quickly.  I just picked up Sarah Maas first book in the series “A Court of Thorns and Roses” which sounds super interesting (the third in the series just came out).  So we’ll see how this goes.

After reading “The Hate U Give” a few weeks ago, I also picked up “Everything Everything” which is now a movie.  It looks like an interesting story, so I’ll dive into that one next.  Also a new retelling of Jane Seymour (Queen of England) with a more pop twist.  Also looks super good.

Of course I’m still reading my other books as well….cause heaven forbid I just read one book at a time.  I finished two Irish mysteries while in Ireland last week, and I also picked up two new books over there as well.  I know I could order them online, but when in Ireland!  I picked up Graham Norton’s book in paperback (it’s also an Irish mystery).  I love his talk show (no seriously, watch it on BBC America…it’s what a talk show should be!  Plus, accents!) so I think I’d love his writer’s voice.  We’ll see.