Sometimes there is a book that meets the hype built around it.  HBO recently started to air the new series “Big Little Lies” with Reese Witherspoon, Nicole Kidman, and Shailene Woodley.  On a whim, I bought the book at Target (cause it was on sale, and I was intrigued by the clips I saw of the show.)  Then, a few days later, I was in NYC with my Aunt and Mom and Shailene Woodley was the guest on Good Morning America while we were there.  The clips they showed of the show, and the way she described it made the book seem all the more interesting to me. 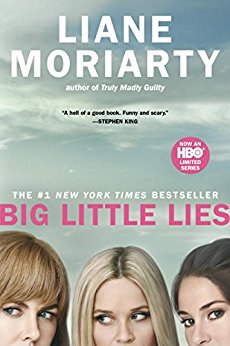 So, on a Thursday afternoon, I picked up the book, and didn’t put it down until Friday night.  It was engrossing.  And I’m not going to lie, I had no idea about the twist in the end.  Basically, the book leads the reader on a journey from the start of a Kindergarten school year, to an even that happens during a parent event several months later. There is a death…..but we’re not sure the who, the what, and they why of it.

The main characters are three drastically different women, all in different stages of their lives but with the common thread of children starting school.  There is Madeline, the active mother with a young child and an older child from her previous marriage.  Celeste, the seemingly perfect wife with twin boys.  Finally there is Jane, a young single mother with baggage that she brings with her when she moves her son to the new school district.  Set in Australia, there are a lot of similarities between the school mom’s there and what I imagine them to be like in the US.  Granted, I’ve never wanted kids and this book just continues that idea.  The kids are all sort of annoying, and the parents are even worse!

But the real story is the drama between families of different backgrounds.  School politics blended with economic anxiety.  Jane is considered an outsider due to her transient status, and her “single”-ness.  Celeste is seen as perfect with a rich husband and beautiful life.  Madeline while on the outside cheerful and friendly, still feels the pain of her divorce many years before.  The three women become unlikely friends, and leading up to that night at the parent’s event, we learn more about what connects them and what secrets they are trying to keep.

I was so into this book….everyone seemed real and I could imagine these scenarios happening all over the country at various schools.  Like a mini version of the Housewives.  I now want to watch the HBO show to see how it translates to the small screen.