I have a tendency to get into reading ruts.  I’ll exhaust a bunch of books about a topic like Tudor England, crime bosses of the 1930’s, and lately some feminist writings.  I don’t know what drew me to a little corner of the world of Science Fiction/Fantasy books, but in the past week, I’ve read (or attempted to read) three different versions of a fantasy novel.

This is the one I couldn’t finish.  To me, it was confusing.  It was like a weird town, where some people had jobs, but others didn’t.  Some kid ran a pawn shop, another kid could change form into animals.  It was weird.  And it didn’t really draw me in very much.  I think I got through about 5 chapters before I couldn’t focus on it anymore.  It was a big deal for a while, I think it even had a podcast attached to it.  So, if you’re a fan of weird, twisted novels, by all means, check this one out.  I might try to revisit it, but I not any time soon for sure.

The Bear and the Nightingale by Katherine Arden

Timely, considering all the talk about Russia lately *ahem*.  Based on a bunch of Russian folktales, this is the story of a young woman with extraordinary talents.  While she appreciates what she has, the surrounding village considers her a witch and tries to avoid her at all costs.  When a new priest comes to town, he inspires the village to the fear God and fear his wrath.  This leads the village to turn away from their previous habits.  Theses disappearing habits have a devastating affect on the town, and only young Vasilisa can help bring the town peace with the help of the Lord of Winter who she develops a special bond with as the village comes under attack from The Bear.  It is a beautiful written book, and introduces readers to aspects of Russian folklore that they probably don’t know.  I enjoyed the story immensely and can picture it on the big screen. 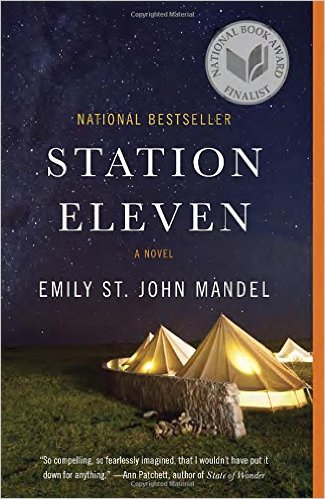 This one is sooooooooooooooo good.  And terrifying.  And hopeful.  Hopefying?  Terriful?  Whatever.  It starts at the very beginning (a very good place to start) at a production of King Lear in Toronto.  The lead actor collapses and a young man from the audience attempts to save his life.  Witnessed by a young child in the play, he tries to comfort her.   Later that night, reports start trickling in about a Georgian Flu (not the state, the country).  A plane full of infected people arrives from Moscow and Toronto becomes ground zero in North America for an outbreak.   It escalates quickly, and soon, society collapses.

The book alternates from that time, to the current Year (whatever after the outbreak).  We follow a Traveling Symphony which includes the young child actor, Kristin, who was there the night the actor died.  The symphony attempts to provide life and art to towns in/around the great lakes region to small settlements of survivors.  When they return to one of their regular towns, they find it overcome with a type of cult led by an enigmatic young “prophet”.  The symphony escapes the town and takes on a stowaway which leads to potentially disastrous situations.  We travel back in time to before the outbreak with people affiliated with the characters.  The lead actor, the lead actor’s best friend, his ex-wife, and the young paramedic who tried to save the actor that night.

While not the best time to read a novel of life after civilization collapses (sometimes I fear that happening with the new POTUS #resist), the story of the traveling symphony searching to provide a little light to a dark world was strangely hopeful.  Towards the end, they make their way to an airport where a man has set up a museum of civilization with relics from the previous life.  They even might find a town who rigged up some electricity.  After 25 years since the Georgian Flu, life goes on and everyone figures out how to survive the life they’ve been handed.

On that note, I’m going to take a break from those books and head back to my musty historical fiction mystery books.  Victorian times seem so quaint after all that death and destruction.