Again with the historical mysteries.  I’m definitely in a bit of a rut, but they time periods the describe are fascinating!  This one was a little later than my usual mysteries.  Lately I’ve been all about the Victorian/Edwardian mysteries.  This one is smack dab in between WWI and WWII in Britain.  It’s also a miniature history of the BBC (which is my one of my favorite parts of England). 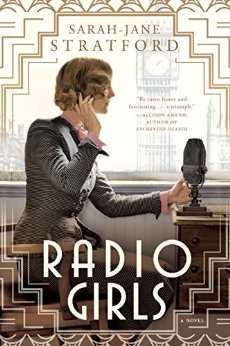 Our intrepid heroine is an “American” (but really Canadian) who lucks out in a secretarial position at the relatively new BBC radio company.  Still very much a man’s world, she is introduced as a minor secretary, but soon works her way into the “Talks” department which sounds like what the BBC is today.  Run by one of the only female in senior positions, Maise (our heroine) soon finds her calling as a producer.  The talks run the gamut from “women’s interest” to finally politics.  While working with her new mentor, she becomes entangled in the intrigues leading up to WWII.  I won’t spoil how, but it gets mighty interesting the higher up in position she goes.

She does run in to the normal nasty things a woman at the time runs into…..so called “gentlemen” who just want one thing, dismissive male bosses, the “morality” police of the time, and her own family issues as well.

I love reading about the history of women in the workplace.  Just the crap they had to go through to do something they love really astounds me.  It’s annoying that even today women still go through some of the same crap (Hi dismissive bosses!!).  But reading about these types of women give me hope that one day we won’t be treated like children, but that we are meaningful to the society (and also get much more crap done).