One of my dreams in life is to go to a book retreat.  This could be a resort that is based on books, a Jane Austen tour in England, or just a cozy getaway in a literary town.

This series of cozy mysteries hits that want/need immediately.  It’s the story of, well, Storyton Hall and it’s proprietor Jane Steward.  Like any good cozy mystery, it surrounds a dream job, an eclectic cast of characters, and a little LOVE thrown in for good measure.

Oh, and there is a bit of the fantastical as well.  I don’t want to spoil it, but let’s just say it involves a secret group and a super cool library.  Which, as a book lover, seems like would be the most awesome thing to be a part of.  But I digress.

So far there are only two books in the series, the second of which I finished last night.  The first, “Murder in the Mystery Suite” 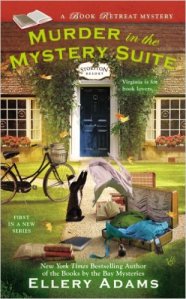 In order to bump up reservations and make a name for herself, Jane concieves a “Murder and Mayhem” weekend….replete with scavenger hunts and crime solving games.  Of course, during any good cozy mystery, there is a death.  This thrusts Jane into her own set of crime solving duties, all while trying to maintain the dignity of Storyton Hall (and making sure it doesn’t affect the reservations).

The second book, “Murder in the Paperback Suite”

Even after the disaster of the murder weekend, Jane decides to hold a more sedate “romance” weekend for those fans of Jane Austen and historical, bodice rippers everywhere.  Yet again, there is a death.

Sometimes in these cozy mysteries, you wonder why the people stay in these small little towns.  It’s a bit like Murder, She Wrote.  There seems to be a disproportionate death to village member ratio.  But I digress.

This time the suspects range from local town members, to world famous romance novelists, to surprise journalists.  Again, Jane has to weigh being a business owner with solving crimes around her own business.   Her super cute love interest also makes another appearance, and the reader finds out some surprising things about him that could shake their relationship.

I would love to see this book made into a TV show or movie….the show it most closely resembles is “The Librarians” on TNT.  But without all the magic.  It’s at least a little more firmly based in reality.  There is still a fun element to them that I can’t wait to see explored.